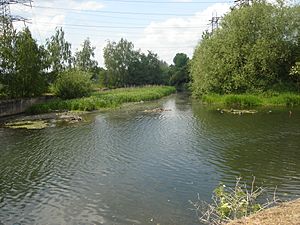 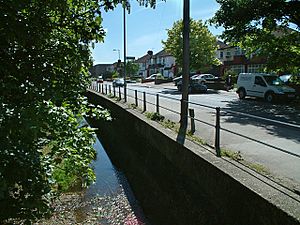 The brook at Turkey Street, Enfield

The brook is named from the hamlet Turkey Street, which is recorded as Tokestreete (1441), Tuckhey strete (1610), Tuckey street (1615), and Turkey street (1805) (probably street of houses, i.e. hamlet, from Middle English strete, associated with a family called Toke or Tokey).

The modern form of the name Turkey, not in use before the 19th century, is no doubt due to folk etymology.

The brook flows in an easterly direction and is joined by other streams including Cuffley Brook, Cattlegate Brook and the Small River Lea. Along its course it flows through Cuffley, Crews Hill Golf Club, Clay Hill, Whitewebbs Park, Forty Hill and Albany Park before merging with the River Lee Navigation below Enfield Lock.

The brook is mostly shallow, fast flowing and clean and can support wildlife. Coarse fish including dace use the brook to spawn.

All content from Kiddle encyclopedia articles (including the article images and facts) can be freely used under Attribution-ShareAlike license, unless stated otherwise. Cite this article:
Turkey Brook Facts for Kids. Kiddle Encyclopedia.