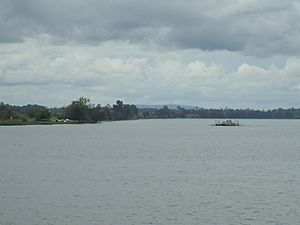 The Clarence River, with the Ulmarra Ferry

Ulmarra is a small town on the south bank of the Clarence River in New South Wales, Australia in the Clarence Valley district. At the 2006 census, Ulmarra had a population of 446 people.

The town had the distinction of being the smallest local government area of New South Wales until 2000 when it amalgamated with the Nymboida Shire to form Pristine Waters Shire, which later merged with Copmanhurst, Grafton and Maclean Shires to become the Clarence Valley Council.

Ulmarra's name comes from an Aboriginal word meaning "Bend in the river".

The Ulmarra Ferry is a vehicular cable ferry, which crosses the Clarence River from a point about 1 kilometre (0.62 mi) north of Ulmarra, to Southgate on the north bank.

All content from Kiddle encyclopedia articles (including the article images and facts) can be freely used under Attribution-ShareAlike license, unless stated otherwise. Cite this article:
Ulmarra, New South Wales Facts for Kids. Kiddle Encyclopedia.