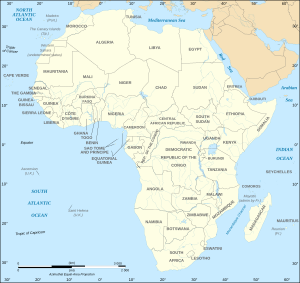 All African states are members of the African Union.

Key supporters of the plan were Zimbabwean President Robert Mugabe and Libyan leader Muammar Gaddafi. In February 2009, upon being elected chairman of the 53-nation African Union, Gaddafi told the assembled African leaders: "I shall continue to insist that our sovereign countries work to achieve the United States of Africa." After Gaddafi's death, Mugabe expressed interest.

All content from Kiddle encyclopedia articles (including the article images and facts) can be freely used under Attribution-ShareAlike license, unless stated otherwise. Cite this article:
United States of Africa Facts for Kids. Kiddle Encyclopedia.