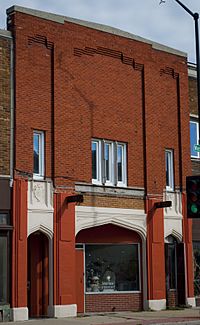 The Uptown Theater was a movie theater designed by Wade B. Denham and built in 1928 in the Uptown neighborhood of Racine, Wisconsin.

The building first opened on May 2, 1928, as a live theater, sponsored by businessman Ernst Klinkert., and known as the Majestic Theater. Its single stage with 1,292 seats was built on a hillside, using the natural slope of the land in its design. The building included eight apartments, for actors to stay in during runs. The Majestic Theater closed in 1930, but it was converted into a cinema, and it reopened in 1940, now called the Uptown Theater. It closed once again in 1953, but reopened again the next year, before permanently closing at the end of 1959.

After the Uptown Theater closed, its lobby was converted into retail space which became the Avenue Frame Shop. This store remained open for decades, but has recently closed. In 1981, a group called Preservation Racine set out to restore some of the city's former landmarks, including the Uptown, and in 1982, with their support, it was listed in the National Register of Historic Places.

As of 2015, the Uptown Theater remains abandoned.

All content from Kiddle encyclopedia articles (including the article images and facts) can be freely used under Attribution-ShareAlike license, unless stated otherwise. Cite this article:
Uptown Theater (Racine, Wisconsin) Facts for Kids. Kiddle Encyclopedia.