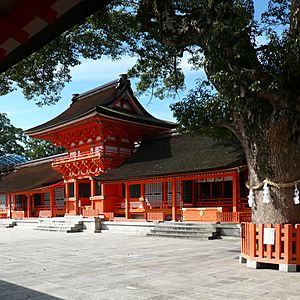 Usa-jingū (宇佐神宮), also known as Usa Hachiman-gū (宇佐八幡宮), is a Japanese Shinto shrine in the city of Usa in Ōita Prefecture on the island of Kyushu.

A Buddhist temple called Miroku-ji was built next to it in 779, making it what is believed to be the first shrine-temple (jingū-ji) ever. The shrine-temple complex, called Usa Hachimangu-ji (宇佐八幡宮寺), lasted until 1868.

Usa first appears in the chronicles of Imperial history during the reign of Empress Shōtoku.

Usa jingū was designated as the chief Shinto shrine (ichinomiya) for the old Buzen Province. It serves today as one of the ichinomiya of Oita and Fukuoka Prefectures. From 1871 through 1946, Usa was officially listed among the first rank of government supported shrines.

All content from Kiddle encyclopedia articles (including the article images and facts) can be freely used under Attribution-ShareAlike license, unless stated otherwise. Cite this article:
Usa-jinjū Facts for Kids. Kiddle Encyclopedia.