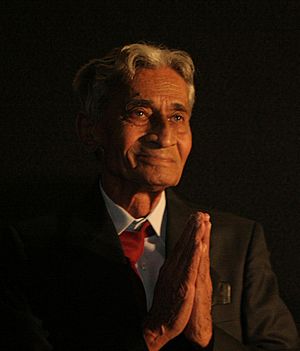 V. K. Murthy (Kannada: ವಿ. ಕೆ. ಮೂರ್ತಿ; 26 November 1923 – 7 April 2014) was an Indian cinematographer. During his career, he won two Filmfare Awards in the best cinematographer category. His best known movies are Pyaasa (1957), Kaagaz Ke Phool (1959) and Sahib Bibi Aur Ghulam (1962). For each of those movies, he won a Filmfare Award. He was born in Mysore, Kingdom of Mysore and lived in Mumbai for most of his life.

All content from Kiddle encyclopedia articles (including the article images and facts) can be freely used under Attribution-ShareAlike license, unless stated otherwise. Cite this article:
V. K. Murthy Facts for Kids. Kiddle Encyclopedia.