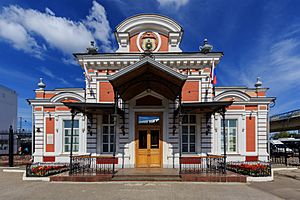 A Very Important Person is a person who is accorded special privileges due to the status or importance of the person. The term "VIP" (usually pronounced V-I-P) is often used as an abbreviation for Very Important Person. Such a person might be a celebrity, a head of state, a politician, a rich person, or any other person who receives special service for any reason.

The term V.I.P. appeared before World War Two, starting in the Russian emigration. It abbreviated the Russian phrase “ves'ma imenitaya persona” which described someone accorded special privileges due to social status or importance.

All content from Kiddle encyclopedia articles (including the article images and facts) can be freely used under Attribution-ShareAlike license, unless stated otherwise. Cite this article:
VIP Facts for Kids. Kiddle Encyclopedia.