The VTech Socrates is an 8-bit educational home video game console manufactured and released in 1988 by VTech. The console features a robot character Socrates, named after the philosopher. The character is visually similar to Johnny Five from the Short Circuit movies. It was discontinued in the early 1990s.

Yeno distributed the system in Europe. In Germany, under the name Prof. Weiss-Alles, which translates to "Professor Knows-Everything". And in France, as the Professeur Saitout; Jeu Educatif Video, where "Saitout" comes from the french phrase "Sais Tout", meaning "Knows All".

VTech also distributed the system in Canada, being sold as the Socrates Saitout; Jeu Educatif Video. 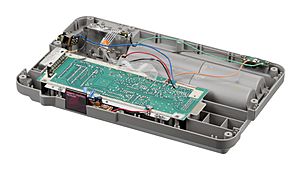 The inside of the Socrates. The system ran off six D batteries or used an optional AC adapter.

The main unit of the Socrates system came with five categories: Math Problems, Word Problems, Word Games, Music Games, and Super Painter. Math Problems and Word Problems tested basic skills regarding mathematics, spelling, definition, and sentence construction. Word Games provided games that resembled hangman, anagrams, and a racing game where players spelled words in order to complete laps around a track. Music Games gave students the opportunity to compose simple melodies, listen to classic folk songs played by the machine, or play Simon Says with different notes. Super Painter allowed students to create on-screen art through the use of different brushes, colors, backgrounds, and clip art. The Super Painter program would be spun off by VTech for their Video Painter line of toys.

Additional games for the system were sold separately as cartridges which resembled 3.5" floppy disks. They were divided into two categories. Brain Teasers games were released with blue text on the label and tested students' memory and problem solving skills. Awareness games were released with red text on the label and taught students trivia, mathematics, and geography. Also, additional peripherals for the system had their own cartridges. The CAD Professor used the Mouse tablet, and focused on architectural, textile, and fashion design. The Touch Pad allowed younger students to practice writing letters and numbers and drawing shapes; however, students could also use the Touch Pad with the Super Painter application. Because the Touch Pad did not have its own display, students often had difficulty knowing if what they wrote on the Touch Pad would appear correctly on the TV screen.

The system also featured voice capabilities through the use of an add-on voice cartridge compatible with all games, which could be purchased separately.

Despite the processing speed of the Zilog CPU – 3.57 MHz, compared to the Nintendo Entertainment System's 1.79 MHz in NTSC regions – the Socrates often seemed slow, with the system often taking several seconds to display a static image. The system would "draw" images by filling in areas of the screen with color one line at a time; it is not known if this was an effect employed for the student's enjoyment or if it was due to the slow processing time of the system. There was also a very noticeable delay between user input and the system responding. Response times did not seem to be affected by the presence or absence of the voice cartridge.

There were 9 titles known to have been released.

Background shading indicates that the game required a separate peripheral.

The Socrates was powered by a Zilog Z80A processor.

The system came standard with a wireless full keyboard with two wired-on controllers. The keyboard sent infrared signals to a receiver on the main console. Consoles varied in their effectiveness in receiving the signals; some could receive signals from up to twelve feet away, while others required the user to maintain a close and direct line with the receiver. The Mouse and Touch Pad peripherals – for the CAD Professor and Touch Pad cartridges respectively – also used infrared signals to communicate with the main system, but similar signal receiving issues would often hamper the usefulness of these add-ons.

The system was quite expensive upon its initial release; most consoles saw prices of up to $130. The cost put it at odds with other educational toys and even VTech's other products, including the Whiz Kid systems. The system also came out as the third generation of video game consoles – including the Sega Master System and the even more popular Nintendo Entertainment System – were on the way out. Because of the Socrates' limited games library and slow speeds, it quickly became obsolete among growing expectations regarding speed, graphics, and engagement, even among educational titles.

The Socrates was phased out after only a few years. Today, it is considered rare, although attempts to emulate the system proceed as part of the MESS project. A small amount of hobbyist interest in the Socrates has risen in the past decade, as past users have shared more information about it on the Internet.

All content from Kiddle encyclopedia articles (including the article images and facts) can be freely used under Attribution-ShareAlike license, unless stated otherwise. Cite this article:
VTech Socrates Facts for Kids. Kiddle Encyclopedia.