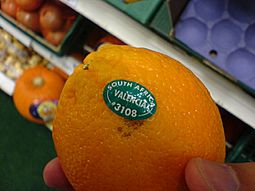 The Valencia orange is an orange first made by the Californian agronomist William Wolfskill, on his farm in Santa Ana. The orange was later sold to the Irvine Company, who later used half of its land to grow the orange. Orange County is named after this orange because of its popularity. The Irvine Company's Valencia operation later split from the company and became Sunkist. Cultivation of the Valencia in Orange County had stopped by the mid-1990s because of rising property costs, which caused what remained of the Southern California orange industry to move to Florida. It is usually harvested between March and June.

All content from Kiddle encyclopedia articles (including the article images and facts) can be freely used under Attribution-ShareAlike license, unless stated otherwise. Cite this article:
Valencia orange Facts for Kids. Kiddle Encyclopedia.