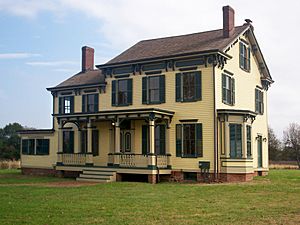 The Van Liew-Suydam House is located at 280 South Middlebush Road in Somerset, New Jersey. It was built in the 18th century by Peter Van Liew. Joseph Suydam later built an addition to the house. The largest section of the house was built in 1875.

In October 2019, filming began on a Stephen King miniseries starring Julianne Moore and Clive Owen at the house.

All content from Kiddle encyclopedia articles (including the article images and facts) can be freely used under Attribution-ShareAlike license, unless stated otherwise. Cite this article:
Van Liew-Suydam House Facts for Kids. Kiddle Encyclopedia.