The original or "Old" Van Nuys Branch library was built in 1926 based on a Spanish Colonial Revival style design by architects Allen & Allen. In 37 years of operation, the circulation grew from 27,000 to more than 350,000 volumes annually. The old branch was closed in 1964, and replaced with a new branch in the Van Nuys Civic Center on the other side of Van Nuys Boulevard.

In 1987, the "Old" Van Nuys Branch and several other branch libraries in Los Angeles were added to the National Register of Historic Places as part of a thematic group submission. The application noted that the branch libraries had been constructed in a variety of period revival styles to house the initial branch library system of the City of Los Angeles. 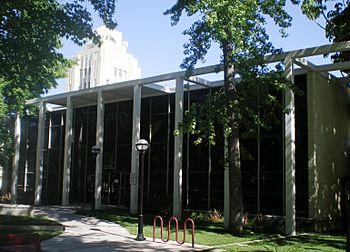 The "New" Van Nuys Branch library opened in 1964 in the then new Van Nuys Civic Center. The Mid-century modern style one-story masonry building extends out into the landscape with a modernist colonnade, and is shaded by groves of trees.

The building was also headquarters for the Los Angeles Public Library's bookmobile service. It was temporarily closed and surrounded by a chain-link fence in 2005, and in 2007 the city announced plans to auction off the building. Instead it was renovated to reopen as the branch library again.

In January 2019, the "New" Van Nuys branch library closed again for renovations. It was scheduled to reopen in Summer 2020, but the renovations have been delayed due to COVID-19.

All content from Kiddle encyclopedia articles (including the article images and facts) can be freely used under Attribution-ShareAlike license, unless stated otherwise. Cite this article:
Van Nuys Branch Facts for Kids. Kiddle Encyclopedia.