Vancouver Waterfront Park is a 7.3-acre (3.0 ha) waterfront park in Vancouver, Washington, in the United States. 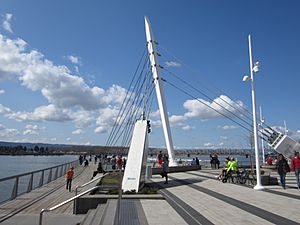 The park is part of a 32-acre (13 ha), 21-block mixed-use urban redevelopment with office and retail spaces, and residential units. The site was originally home to a paper mill owned by Boise Cascade that closed in 2005. It was acquired by real estate developer Columbia Waterfront LLC in 2008 and a master plan from the firm was approved by the city government the following year. New street connections were built from the north in 2014 and 2015. The M.J. Murdock Charitable Trust was announced as the first office tenant for the project in 2015. The $1.3 billion project, consisting of a city park and pier and five residential, office and retail buildings, began construction in 2016. The park opened September 29, 2018.

At the park's opening, the city officials celebrated Esther Short, who donated a large parcel of land that included the development's campus. Short's goal, with her donation, included giving access to the general public to the scenic location. The city installed a pair of Portland Loo public toilets at the park in October 2018. The loos are especially designed to remain open 24/7. Slats allow a potential user to see if the toilet is already occupied, and if more than one individual is inside. They are large enough that a user can wheel in a child's stroller, shopping buggy, bicycle, or dog. The bathrooms installed in Vancouver are equipped with both a table for changing babies, and a bin for addicts to safely dispose of used needles.

All content from Kiddle encyclopedia articles (including the article images and facts) can be freely used under Attribution-ShareAlike license, unless stated otherwise. Cite this article:
Vancouver Waterfront Park Facts for Kids. Kiddle Encyclopedia.