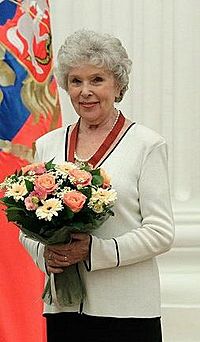 Vera Vasilyeva Kuzminichna (born 30 September 1925) is a Soviet-born Russian movie and stage actress. She was honored with People's Artist of the USSR in 1986. She was twice awarded the Stalin Prize in 1948 and in 1951. She was known for her roles in Bride with a Dowry (1954), Pokhozhdeniya zubnogo vracha (1965) and Bezumnyy den ili zhenitba Figaro (1974). Her career began in 1943.

Vasilyeva was born in Moscow. She was married to actor Vladimir Ushakov until his death in 2011. They had no children.

All content from Kiddle encyclopedia articles (including the article images and facts) can be freely used under Attribution-ShareAlike license, unless stated otherwise. Cite this article:
Vera Vasilyeva Facts for Kids. Kiddle Encyclopedia.