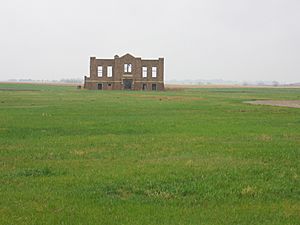 Verendrye was a historic unincorporated community in McHenry County, North Dakota, United States, located approximately eight miles northwest of Karlsruhe and 13 miles northeast of Velva within Falsen Township. Although classified by the USGS as a populated place, it is considered a ghost town. 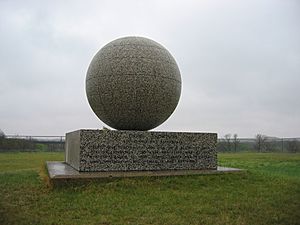 The community was first known as Falsen, founded in 1912 by Norwegian settlers, who named it for Norwegian statesman Christian Magnus Falsen. Falsen was also the name of the station on the Great Northern Railway. The post office was established with the name Falsen in 1913, but the name was changed in 1925 to honor Pierre de la Verendrye, an early French-Canadian explorer who was the earliest known European to tour the North Dakota prairies. The population of Falsen in 1920 was 75. The population of Verendrye in 1938 was 100. The post office closed in 1965, with mail being redirected to Bergen. The last original resident moved away in December 1970 and the townsite sat vacant until it was purchased in 1990 and developed by the current owners into a farmstead, leaving the remains of the school building as the last true remnant of the town.

Along with Norwegians, Falsen was originally settled by German-Russians from the villages of Kandel and Sulz in the Ukraine.

A monument to the later North West Company fur trader and explorer, David Thompson, erected by the Great Northern Railway in 1925, remains on a hilltop overlooking the former townsite.

The Verendrye Electric Cooperative was established here in 1939 but relocated to Velva in 1941.

Verendrye is located in the Mouse River Valley along the route of the BNSF Railway.

All content from Kiddle encyclopedia articles (including the article images and facts) can be freely used under Attribution-ShareAlike license, unless stated otherwise. Cite this article:
Verendrye, North Dakota Facts for Kids. Kiddle Encyclopedia.