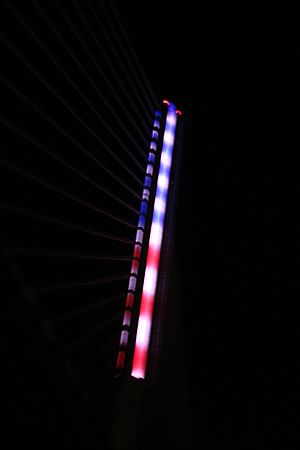 LED pylon lit up to resemble the American flag 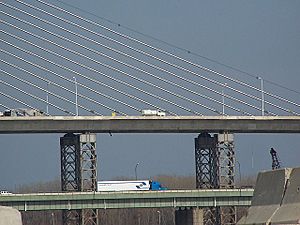 The Veterans' Glass City Skyway, commonly called the Toledo Skyway Bridge, is a cable-stayed bridge on Interstate 280 in Toledo, Ohio. After many delays, it opened in 2007. The bridge has taken traffic and reduced delays on the Robert Craig Memorial Bridge, a bascule bridge that was, until its transfer to local control, one of the last moveable bridges on the Interstate highway system. The Skyway is Ohio Department of Transportation's (ODOT) biggest single construction project.

The ODOT and the city of Toledo began planning the bridge in April 1999. The project consisted of building an 8,800 feet (2,700 m) span across the Maumee River and low-lying land on its banks. The community selected a "glass" theme for the bridge design, choosing to honor the region's heritage in the glass manufacturing industry. The bridge was designed by Figg Bridge Engineers, Inc. for ODOT.

The bridge carries three lanes of traffic in each direction. The road surface reaches a height of 130 feet (40 m) above the surface of the Maumee River. The bridge is the most expensive project ever undertaken by ODOT, costing about US$237 million.

The main attraction of the bridge is the single pylon which contains 384 light emitting diode (LED) fixtures that can create 16.7 million color combinations. The LEDs shine through the glass facing on all four sides of upper 196 feet of the main pylon. These lights can be visible up to 3 miles (4.8 km) away.

All content from Kiddle encyclopedia articles (including the article images and facts) can be freely used under Attribution-ShareAlike license, unless stated otherwise. Cite this article:
Veterans' Glass City Skyway Facts for Kids. Kiddle Encyclopedia.