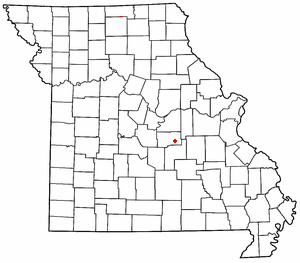 Vichy is an unincorporated community in southern Maries County, Missouri, United States. It is located on U.S. Route 63 about ten miles north of Rolla. The community was founded in 1880 and is named after Vichy, France. A post office called Vichy has been in operation since 1880. The Rolla National Airport, a former U.S. Army airfield owned and operated by the City of Rolla, with two 5500 foot asphalt runways is located nearby.

All content from Kiddle encyclopedia articles (including the article images and facts) can be freely used under Attribution-ShareAlike license, unless stated otherwise. Cite this article:
Vichy, Missouri Facts for Kids. Kiddle Encyclopedia.