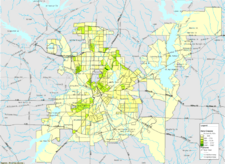 Vickery Meadow (also known as Vickery Meadows) is an ethnically-diverse neighborhood consisting almost exclusively of apartment complexes in North Dallas, Texas, United States. The Vickery Meadow Youth Development Foundation states the neighborhood is bounded by Northwest Highway, Royal Lane, Central Expressway, and Skillman/Abrams. The City of Dallas Office of Economic Development states that the boundaries of the Vickery Meadow Tax Increment Financing district, which was established in 2005, are “the east side of the intersection of US 75 (Central Expressway) and Park Lane and extends eastward along Park Lane to the ‘Five Points’ intersection at Park Lane, Fair Oaks Avenue and Ridgecrest Road.” Leslie Minora of the Dallas Observer described it as "a dense swath of about 100 apartment complexes cradled by NorthPark Center and Whole Foods to the west and Half Price books to the south. It's an overlooked anthill, population 25,000, packed with people here by circumstance."

The area is one of the most densely populated areas of Dallas and is home to many immigrants and refugees. The area was originally developed to provide housing for childless, upper income people in the mid-1970s. The area was built out in the early 1980s. With the passage of the Fair Housing Act in 1988, the demographics shifted to a mostly low income, immigrant population from Latin America and other countries around the world. During that time, area public schools began to become overcrowded. The school district responded by opening new schools in the area, including one high school, one middle school, and several elementary schools; some apartment complexes were razed to make room for new schools. The Vickery Meadow Improvement District (VMID), a coalition of fifty area organizations, serves the Vickery Meadow area.

In 2014 the Dallas City Council member representing Vickery Meadow, Jennifer Staubach Gates, referred to it as "kind of the melting pot of America."

The area was developed as multifamily residences that provided housing for an influx of people to the Dallas area that began in the 1970s. When it was fully built out, Vickery Meadow had 15,500 apartments and 2,300 condos in an area of 2.86 square miles.

Many of these residents were described by Michael E. Young of The Dallas Morning News as "young, hip, and reasonably well off." They reportedly planned to stay in Vickery Meadow for a short time before buying houses in the Dallas suburbs.

In 1988, the U.S. federal government passed the Fair Housing Act, which, under most circumstances, prohibits any policy that excludes families with children from living in an apartment complex. The passage of the act—which forced the complexes to admit children—and a rental market recession, caused a decrease in rent prices and a shift in the area's demographics throughout the 1990s. Immigrants and refugees from Mexico, Central America, Bosnia, Burma, Bhutan, and parts of Africa moved into the apartment complexes. The infrastructure that existed was largely not designed for families. The Vickery Meadow Improvement District, a coalition of fifty area organizations, opened in 1993 to improve the quality of life of area residents and stabilize the area real property and real property investments. In 2004, Casie Pierce, the executive director of the Vickery Meadow Public Improvement District, argued in an editorial in The Dallas Morning News that Vickery Meadow ought to be redeveloped into modern urban renewal.

In October 2014 Thomas Eric Duncan, a Liberian who lived in the vicinity of Vickery Meadow, contracted ebola as part of an epidemic. Vickery Meadow residents stated that people were discriminating against them because of the incident.

Vickery Meadow is the mostly densely populated community in Dallas, and many of its residents are immigrants and refugees. Vickery Meadow attracts refugees because of its inexpensive housing, access to health care facilities, and public transportation. The greater Vickery Meadow area, consisting of 5.3 square miles (14 km2) of land, including open parkland, had around 53,000 residents by 2004. The core Vickery Meadow area, known as the Vickery Meadow Improvement District and consisting of 2.86 square miles (7.4 km2), had 40,646 people. Of the population, 5,303 were under 6 years old, 3,932 were ages 6 through 13, 1,670 were ages 14–17, 27,555 were ages 18–64, and 2,186 were 65 or older. 39% of the people were considered to be in poverty. The average residency period was less than five years. Of the population about 40% were Hispanic or Latino, 32% were White, 22% were African-American, and 6% were other groups, mostly including immigrants from sub-Saharan Africa. The Vickery Meadow Improvement District said that the true Hispanic and Latino population may be higher due to illegal immigration.

All content from Kiddle encyclopedia articles (including the article images and facts) can be freely used under Attribution-ShareAlike license, unless stated otherwise. Cite this article:
Vickery Meadow, Dallas Facts for Kids. Kiddle Encyclopedia.