Kids Encyclopedia Facts
This page is about the Victoria Memorial in Liverpool. For other monuments to Queen Victoria, see Victoria Monument (disambiguation). 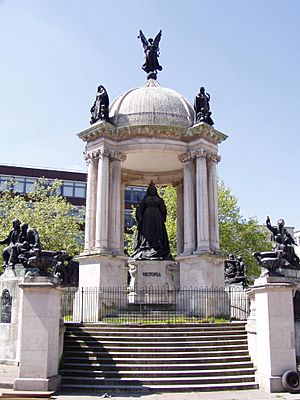 The Queen Victoria Monument is a large neo-Baroque or Beaux-Arts monument built over the former site of Liverpool Castle at Derby Square in Liverpool.

A large ensemble featuring 26 bronze figures by C. J. Allen (some in New Sculpture style), it was designed by F. M. Simpson of the Liverpool School of Architecture, in collaboration with the local architectural firm of Willink and Thicknesse and built of Portland stone. The foundation stone was laid on October 11, 1902, and the monument was unveiled on September 27, 1906. It is a Grade II Listed structure, a preservation category for structures of special public interest.

Sharples and Pollard, in the Liverpool volume of the Pevsner Architectural Guides, describe the work as Allen's greatest, and as one of the most ambitious monuments to Queen Victoria.

There are four groups of figures around the pedestal, representing agriculture, commerce, industry and education. Among the figures representing education is a statue modeled on Sir Oliver Lodge. A large (4.42 metres (14.5 ft)) statue of Queen Victoria is at the center, centered in four groups of columns which support a baldacchino-like open dome (which Terry Cavanagh called the monument's "least successful feature"). Atop the column groups are four allegorical figures representing justice, wisdom, charity, and peace. Atop the dome itself is a large figure representing fame.

In 2002, as part of the Liverpool Biennial festival, Japanese artist Tatsurou Bashi created a hotel room around the statue of the Queen entitled Villa Victoria, in which paying guests could spend a night.

The monument standing amidst the desolation of the Liverpool Blitz

All content from Kiddle encyclopedia articles (including the article images and facts) can be freely used under Attribution-ShareAlike license, unless stated otherwise. Cite this article:
Victoria Monument, Liverpool Facts for Kids. Kiddle Encyclopedia.