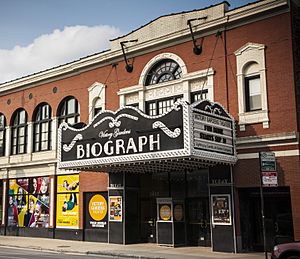 Victory Gardens Theater is a theater company in Chicago, Illinois dedicated to the creation and production of new plays and playwrights. It is located in the Lincoln Park area of the city near DePaul University.

The theater company was founded in 1974. Eight local actors gave $1,000 to start a company outside the Chicago Loop. The theater's first production, The Velvet Rose, by Stacy Myatt premiered on October 9, 1974. Since 2011, Chay Yew has continued their mission as the Artistic Director.

All content from Kiddle encyclopedia articles (including the article images and facts) can be freely used under Attribution-ShareAlike license, unless stated otherwise. Cite this article:
Victory Gardens Theater Facts for Kids. Kiddle Encyclopedia.