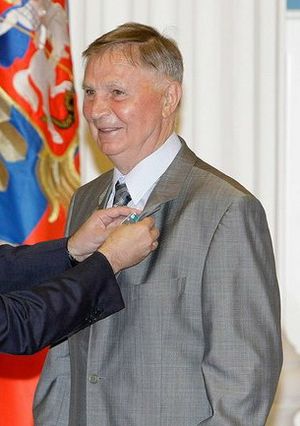 He was born in Moscow. He was the coach of the Soviet team, winning eight World Championship gold medals, as well as Olympic gold in 1984, 1988, and 1992.

Tikhonov also led CSKA Moscow to twelve consecutive league championships. He also coached the Soviet team that lost to the United States, 4-3, in the 1980 Olympic medal round game known as the Miracle on Ice. He was named to the IIHF Hall of Fame as a builder in 1998.

All content from Kiddle encyclopedia articles (including the article images and facts) can be freely used under Attribution-ShareAlike license, unless stated otherwise. Cite this article:
Viktor Tikhonov Facts for Kids. Kiddle Encyclopedia.