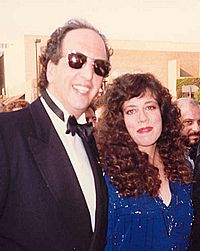 Vincent Andrew Schiavelli (November 11, 1948 – December 26, 2005) was an American character actor in movies and on television.

Schiavelli was born in Brooklyn, New York City into a Sicilian-American family.

Schiavelli is known for appearing in Miloš Forman movies. Movies he starred include One Flew Over the Cuckoo's Nest, Amadeus, The People vs. Larry Flynt, and Valmont.

All content from Kiddle encyclopedia articles (including the article images and facts) can be freely used under Attribution-ShareAlike license, unless stated otherwise. Cite this article:
Vincent Schiavelli Facts for Kids. Kiddle Encyclopedia.