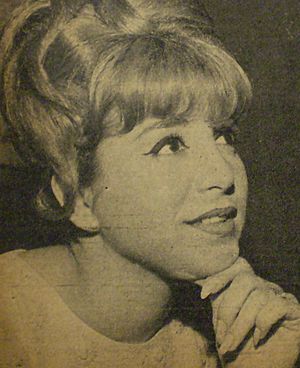 Ana María Francisca Adinolfi (known by her stage name, Violeta Rivas; 4 October 1937 – 23 June 2018) was an Argentine singer and actress. She was born in Buenos Aires. She was known for singing in the music program El Club del Clan.

She performed ¡Que Suerte! in Uruguay, which became her greatest hit. Rivas toured Latin America singing melodic songs. After the 1960s, she continued to perform in other films and to sing other songs such as Colorado, El Baile del Ladrillo, El Cardenal, and others.

All content from Kiddle encyclopedia articles (including the article images and facts) can be freely used under Attribution-ShareAlike license, unless stated otherwise. Cite this article:
Violeta Rivas Facts for Kids. Kiddle Encyclopedia.