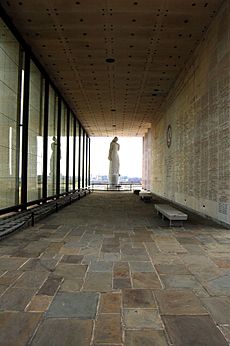 Statue inside the memorial by Leo Friedlander

The Virginians at War documentary video series, combined with other efforts, significantly increased the War Memorial's public image in the local region and throughout the Commonwealth, and highlighted the message of the "Price of Freedom". The Memorial added staff and volunteers to meet the increasing demand for its educational offerings and to assist with increased visitors to the Memorial.

With over 21,000 people from 45 states and 21 countries visiting the War Memorial in 2008, the facilities were stretched to the breaking point. Some groups would be turned away and individual visitors could not be provided educational support because the single auditorium could not support multiple groups for education and meetings. The Memorial is also used by active military personnel for events such as homecomings, re-enlistments, and promotions.

To alleviate the increasing demand on the facilities, an education center was planned to expand the educational opportunities and outreach for students and visitors, and to provide adequate visitor services. A bold design was created to add an 18,000 square foot education center that would provide the needed space to accommodate multiple groups for educational and patriotic programs as well as the casual tourist who is exploring one of Virginia's treasures.

The Virginia War Memorial is the Commonwealth of Virginia's monument to honor the memory of Virginia's men and women who demonstrated a willingness to serve and fight to defend our way of life from World War II to the present; and through its Education Center, serves as the Center of Excellence for the Commonwealth in education of Virginian's experience of war from the birth of our nation to the present. In its educational mission, the Virginia War Memorial will project a variety of internal and outreach programs, artifacts, research materials, Virginians at War documentaries, exhibitions, seminars, and ceremonies will be used to instill a living memorial to all citizens and citizen-warriors of the nation's commitment to freedom.

"Honoring our Veterans, Preserving our History, Educating our Youth, and Inspiring Patriotism in All."

In October 2007, the Memorial Trustees and Directors announced the Center would be named for two American heroes, Paul and Phyllis Galanti. Each has served the United States beyond the call of duty during and since the Vietnam War.

By educating this and future generations, the Commonwealth and its citizens have created a lasting tribute to the state's sons and daughters who have served our great country. The Paul and Phyllis Galanti Education Center intends that their sacrifice and service protecting ours and others freedoms will never be forgotten.

Visiting Virginia War Memorial can be breathtaking. As you walked through the front doors you see a display cabinet full of battle coins in the memory of Claiborne G. Thomasson for his dedication and leadership in United States Air Force 1963-1969. As you are looking around you will see a room with displays from all the wars. There is display information for the American Revolution War, Mexican War, American Civil War, Spanish American War, World War I, and World War II, Korean War, and Vietnam War. Each one had a time line from when it started and major events in between, and when it ended.

The set-up is very beautiful and very informative. There are also words hanging from the ceiling, which read: Sacrifice, Integrity, Discipline, Patriotism, Duty, Courage, and Loyalty. Those are all the qualities that you need to be a part of the army. Each word had the definition behind it. There are also small displays of each war with uniforms and weapons and information talking about the war. There is a bulletin that was letters from the battlefield; soldiers from every conflict feel a mixture of emotions while far away from their loved ones.

Reading one of the letters and it said; his name was Mike and he was writing a letter to his mom, dad and Erin. He basically was saying how God was protecting him and his unit. They didn’t have major injuries, and he also said he prays that the war comes to an end soon so he can get out of that miserable place and come back home to his family. It was very heart felt. There were many more letters on the wall. You can also go outside to see the Veterans Impact Project, which was a sculpture of various items that were symbolic to veterans and community members.

The objects were cast into rubber, creating a wall of clay. The sculpture was molded into three sections and in front of them were honored veterans panels, with their names, rank, branch and years they served. There is a huge wall with writing on it. It was names of soldiers that gave their lives in World War II, Persian Gulf, Vietnam and Korea. Then is also a huge statue of a lady name Memory. There is also a theater called the Reynolds Theater where you can watch information about the wars. They had a conference room, which was called Darrell J. Schumann.

They had a Research Library, a display of guns and uniforms from the National Guard in World War I. They also had a piece of the West Wall of the Pentagon. On September 11, 2001, five terrorists hijacked American Airlines Flight 77 and intentionally crashed the plan into the west wall of the Pentagon in Arlington, Virginia, at 9:37a.m. All sixty-four persons on the flight and 125 persons at the Pentagon were killed. The artifact is a section of the wall from the crash site. The damaged sections of the Pentagon were rebuilt and restored in 2002.

The exhibit honors and remembers those Americans. The next room which was the Freedom Hall, which has the Wall of Honor; Virginia’s Heroes of the Global War on Terrorism. It had their pictures, rank, where they are from, where they served. The room is filled with a lot of pictures. It also has a display of Women in Naval Aviation, there were pictures and uniforms and helmets. They were talking about Kathy Purdy Owens and Marti Bissell. So, there is one more thing that is very interesting. It was called Russell’s Flight, which they had and Airplane on display in the ceiling with a little man on the back of it.

Russell served in the Army Air Forces April 17, 1943. He was flying when he received a direct hit from ant-aircraft fire. The pilot ordered all the crewmen to bail out of the damaged Wabbits Twacks. Russell found that his escape door jammed and returned to the tail of the plane to release the tail gun dome. He climbed on the rear wing and held tight, and then he let go. Tumbling through space and releasing his chute. He fell backward and the impact broke his back. He was captured by the German soldiers and spent 11 months in the German Prisoner of War camp. On his 95th birthday the Virginia War Memorial saluted Russell Scott for his service, and years of being a volunteer at the Memorial. Still to this day, he comes every Wednesday and volunteer at the Virginia War Memorial.

All content from Kiddle encyclopedia articles (including the article images and facts) can be freely used under Attribution-ShareAlike license, unless stated otherwise. Cite this article:
Virginia War Memorial Facts for Kids. Kiddle Encyclopedia.