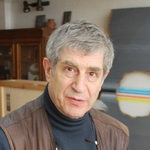 Yankilevsky was known mostly for his work in the Soviet Nonconformist Art movement of the 1960s through the 1980s. His most famous works are his triptychs, works that are hard to classify. His works often create a nightmarish imagery to paint a picture of restrictive mental states about daily life in the Soviet Union, and with the human condition in general.

Yankilevsky was also known for having participated in the Manezh Art Exhibit of 1962, during which Nikita Khrushchev famously chastised the Nonconformist Art Movement as degenerate.

All content from Kiddle encyclopedia articles (including the article images and facts) can be freely used under Attribution-ShareAlike license, unless stated otherwise. Cite this article:
Vladimir Yankilevsky Facts for Kids. Kiddle Encyclopedia.