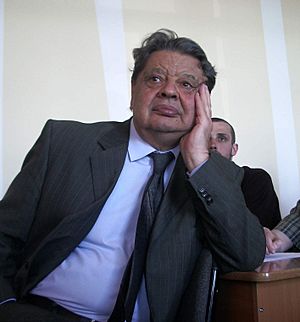 Vladimir Petrovich Zinchenko (Russian: Владимир Петрович Зинченко; 10 August 1931 – 6 February 2014) was a Russian psychologist, academician, educator and writer. He got a Ph.D. in 1957. He was also an editor-in-chief of the journal of Cultural-Historical Psychology. He was born in Kharkiv, Soviet Union (now Ukraine).

All content from Kiddle encyclopedia articles (including the article images and facts) can be freely used under Attribution-ShareAlike license, unless stated otherwise. Cite this article:
Vladimir Zinchenko Facts for Kids. Kiddle Encyclopedia.