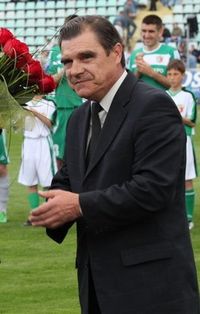 Volodymyr Mykolayovych Troshkin (Ukrainian: Володимир Миколайович Трошкін, Russian: Владимир Николаевич Трошкин; 28 September 1947 – 5 July 2020) was a Soviet footballer and a Ukrainian coach. He was seen by many to be the best right back in 1970s in Ukraine (Ukrainian SSR). He was born in Yenakiieve, then-Soviet Union. From 1972 to 1977, he played for the Soviet Union national football team.

All content from Kiddle encyclopedia articles (including the article images and facts) can be freely used under Attribution-ShareAlike license, unless stated otherwise. Cite this article:
Volodymyr Troshkin Facts for Kids. Kiddle Encyclopedia.