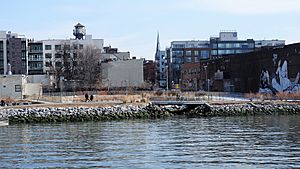 WNYC Transmitter Park is a 6.61-acre public park located in the Greenpoint neighborhood of Brooklyn, New York City, where Greenpoint Avenue dead-ends by the East River shoreline. The site was acquired by the public radio station WNYC in 1935 as the site of twin antennas used for broadcasting. From 1937 to 1990, the city-operated station broadcast its AM signal from this location. Following the adoption of antennas in Kearny, New Jersey and atop the World Trade Center, the Greenpoint property sat unused. Construction on WNYC Transmitter Park began in August 2010 and the park opened two years later in September 2012.

The park also includes a playground. And dominating the park from what would otherwise be a bleak brick wall is an enormous mural of a girl with flowers, by the artist Faile.

All content from Kiddle encyclopedia articles (including the article images and facts) can be freely used under Attribution-ShareAlike license, unless stated otherwise. Cite this article:
WNYC Transmitter Park Facts for Kids. Kiddle Encyclopedia.