The site's early owner, Jeptha Wade, began to develop it into a park in 1872; in 1882, he donated the 63-acre plot to the city government, which later purchased additional land to expand it. As Wade had envisioned, the park became the home of an art museum in 1916 with the opening of the Cleveland Museum of Art.

The park also contains the Wade Park Fine Arts Garden, where a number of sculptures from the CMA's holdings are showcased. The bulk of this collection are located between the original 1916 main entrance to the building and the lagoon. The collection includes a large cast of Auguste Rodin's The Thinker, which sits atop the museum's main staircase. Partially destroyed in a 1970 bombing (allegedly by The Weathermen), the statue has been left largely unrestored both because of Rodin's personal involvement in its original casting and his own willingness to exhibit damaged versions of his works during his life. Today, the damage—which is notated on the plaque mounted at the base of the statue's pedestal—has come to define the casting as unique among the more than twenty original large castings.

Other prominent sculptures in the garden include Gaetano Trentanove's 1904 monument to the Polish expatriate and American Revolutionary War-hero Tadeusz Kościuszko; Chester Beach's 1927 Fountain of the Waters, and a 1928 bronze statuary sundial by Frank Jirouch, Night Passing the Earth to Day, which sits across Wade Lagoon from the museum, near the park's entrance on Euclid Avenue.

Wade Park also borders two sections of the city's larger Rockefeller Park. One lies on Wade Park's northwestern border along Martin Luther King Jr. Dr. and the other directly across University Circle to the southeast on Euclid Ave. 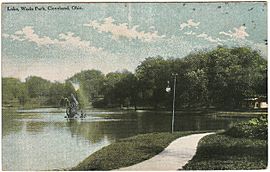 A 1914 postcard image of the lake at Wade Park in Cleveland, Ohio

All content from Kiddle encyclopedia articles (including the article images and facts) can be freely used under Attribution-ShareAlike license, unless stated otherwise. Cite this article:
Wade Park (Cleveland park) Facts for Kids. Kiddle Encyclopedia.