Waialua is a census-designated place and North Shore community in the Waialua District on the island of Oʻahu, City & County of Honolulu, Hawaii, United States. As of the 2020 census, the CDP had a population of 4,062.

Waialua was one of the six original districts of ancient Hawaii on the island, known as moku. Waialua is a former (sugar) mill town and residential area, quite different in its quiet ambiance from nearby Haleʻiwa, which is more commercial and tourist oriented. The Waialua Sugar Mill is the center of this town and the historical base of its plantation history.

Many of the current families living in Waialua are the results of agricultural industry which began in the early 20th century. There was an increased demand for workers as the industry grew, resulting in workers being brought in from China, Portugal, Japan, Korea, Puerto Rico, the Philippines and other areas. Upon arriving in Hawaii, many of these workers were assigned to work in the sugarcane plantations in Waialua. During the late 1980s and into the 1990s, the sugar production decreased as increasing labor and production costs caused producers to move overseas. Many of the families brought to Waialua during the sugar rush remained here and many of their descendants reside there today. 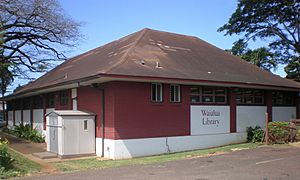 All content from Kiddle encyclopedia articles (including the article images and facts) can be freely used under Attribution-ShareAlike license, unless stated otherwise. Cite this article:
Waialua, Hawaii Facts for Kids. Kiddle Encyclopedia.