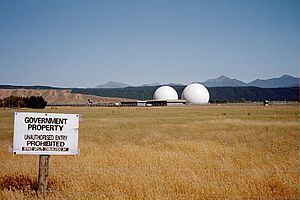 The Waihopai Station is a secure communication facility, located near Blenheim, run by New Zealand's Government Communications Security Bureau. Several protests and disputes surrounding its use and the wider implications of the information gathered has gained the facility some local and international notoriety.

The construction of a new station on 30 hectares of stony ground was authorised by the Prime Minister David Lange and Finance Minister Roger Douglas in 1987. Gerald Hensley comments that Lange: "was ready to work with the Australians [as] … international communications were shifting to satellites … Lange was regularly briefed by me and despite his later claims knew exactly what was involved and why the station was needed. … The Australians were building a similar one at Geraldton [Western Australia] and their Defence Minister explained to the PM why the two installations separated by five time zones would enhance the benefit to both countries."

It has been operating since 1989, and was expanded with the construction of a second interception dish in 1998. It is described as a satellite communications monitoring facility in the Waihopai Valley, near Blenheim. The facility has been identified by MP Keith Locke as part of ECHELON, the worldwide network of signals interception facilities run by the UKUSA consortium of intelligence agencies, which shares global electronic and signals intelligence among the intelligence agencies of the US, UK, Canada, Australia and New Zealand.

The dishes are shielded by giant radomes. Few details of the facility are known, but it is believed that it intercepts and processes all phone calls, faxes, e-mail and computer data communications. It is thought that this data is then sorted and shared with the other members of the UKUSA group. In June 2007, a torus antenna was installed, which is able to receive the signals of up to 35 satellites simultaneously. This antenna is not covered by a radome.

In August 2014, it was revealed that an engineer from the United States National Security Agency had visited New Zealand and held a meeting at Waihopai Station. The topic of discussion was interception of all traffic on the Southern Cross Cable. Due to New Zealand's isolated location, the cable is the only point of international internet and telecommunications access to and from New Zealand. New Zealand politician and Green Party co-leader, Russel Norman, criticised this, saying that it would enable the New Zealand and United States Government to spy on all of New Zealand's internet traffic. The office of National Party Prime Minister, John Key, denied these claims but admitted they were negotiating a "cable access programme" with the NSA but refused to clarify what that was or why the United States NSA was involved. 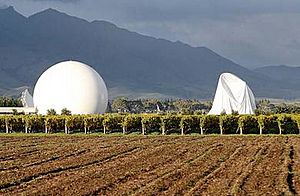 One of the domes collapsed after the 2008 Ploughshares attack

The site is a regular target for protesters and activists who are attempting to have the base closed down. The Anti-Bases Campaign have had regular yearly protests at the base. In 1996 Nicky Hager entered the base at night with John Campbell and a TV3 film crew, and filmed the operations room through a window. Hager returned in 1999 with Mikey Havoc and Jeremy Wells (as his "Newsboy" persona). They snuck into the base and danced in front of cameras for a television show in which Havoc and Newsboy were starring.

All content from Kiddle encyclopedia articles (including the article images and facts) can be freely used under Attribution-ShareAlike license, unless stated otherwise. Cite this article:
Waihopai Station Facts for Kids. Kiddle Encyclopedia.