Wallendbeen is a small town in southern New South Wales, Australia, administered by Gundagai Council. At the 2011 census, Wallendbeen and the surrounding area had a population of 305. The town's name is derived from an aboriginal word for "stony hill".

The town is located on the intersection of the Olympic Highway and the Burley Griffin Way and on the Sydney–Melbourne railway, opened to Wallendbeen in 1877. Wheat is an important industry for the area. It has a fine oval, which has supported a cricket club since 1887. Wallendbeen Post Office opened on 1 July 1885.

It is now becoming a dormitory suburb of Cootamundra. 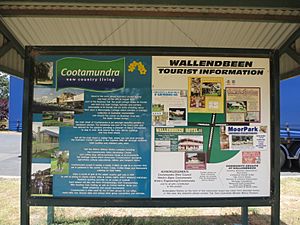 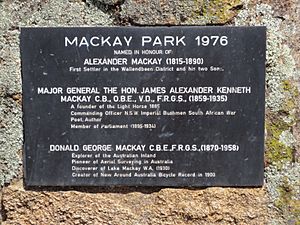 All content from Kiddle encyclopedia articles (including the article images and facts) can be freely used under Attribution-ShareAlike license, unless stated otherwise. Cite this article:
Wallendbeen Facts for Kids. Kiddle Encyclopedia.