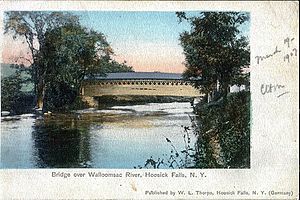 Bridge over the Walloomsac River, Hoosick Falls, from a 1907 postcard

The Walloomsac River (/ˈwɑːluːmsæk, ˈwælʊmsɪk/) from the Native American name, Wal-loom-sac is a 16.8-mile-long (27.0 km) tributary of the Hoosic River in the northeastern United States. It rises in southwestern Vermont, in the Green Mountains east of the town of Bennington in Woodford Hollow at the confluence of Bolles Brook and City Stream where it is labeled Walloomsac Brook on maps but is locally known as "The Roaring Branch". The river then flows west toward Bennington and passes the downtown area to the north. For many years this section was intermittent due to the water having been diverted to power mills in town (ca. 1810). This divergence gave the name Walloomsac to a portion of the river flowing through town on the present course of South Stream. The combined Walloomsac / South Stream joins the Roaring Branch northwest of town. From here the river flows westward as the Walloomsac River and joins the Hoosic River below Hoosick Falls, New York.

The river is crossed by the following roads / railroads via bridges.

Traveling upstream from the confluence with the Hoosic River, the following tributaries feed the Walloomsac:

All content from Kiddle encyclopedia articles (including the article images and facts) can be freely used under Attribution-ShareAlike license, unless stated otherwise. Cite this article:
Walloomsac River Facts for Kids. Kiddle Encyclopedia.