Hoosick Falls is a village in Rensselaer County, New York, United States. The population was 3,501 at the 2010 census. During its peak around 1900, the village had a population of about 7,000. The Capital District Regional Planning Commission projects a further decline in population through 2010 and beyond.

Painter Grandma Moses is buried in the village. The site of the British entrenchments at the Battle of Bennington, 6 August 1777, is nearby and is maintained as Bennington Battlefield State Historic Site.

Although this has been an issue of considerable debate, it's believed the first documented settlers came to Hoosick Falls on the Hoosic River, around 1746. Encyclopedia Americana reports the date of the first permanent settlement as 1688. The French drove the settlers out in 1754 and most of the settlement was burned, but they returned and rebuilt after the French & Indian War ended. Hoosick Falls was incorporated as a village in 1827.

Walter A. Wood Mowing and Reaping Machine Co. In 1852 a blacksmith named Walter A. Wood began manufacturing a reaper in Hoosick Falls. By the 1890s the Walter A. Wood Mowing & Reaping Company was the largest farm machinery manufacturer in the world, taking up 85 acres (340,000 m2) on the west bank of the river. The Wood Company closed in 1924, mainly due to the introduction of John Deere's revolutionary self-propelled farm equipment. Most of these facilities were used by the Colasta Corporation from the mid-1920s until the late 1950s. This company manufactured radio parts. Later, parts of this site were used as a lumber yard/hardware store. A rash of arson fires in the mid and late 1970s consumed the entire complex. The only buildings still in use today are outside of the main complex, the Interface Solutions Plant (formerly the Wood-Flong Paper Mill), which was Walter A Wood's steel foundry. The original Office Building is still present also.

Along with the Walter Wood plant, Hoosick Falls was a boomtown in the 19th century. Many other businesses came into town, bringing people and money with them. Hoosick Falls once had factories that made Paper, small numbers of Appliances, Parts, Glass, and some nominal Soda and Beer Bottling Plants. A large number of rich Victorian homes were built during this period and are still there today, most in good shape. This was also a regional center of Trade and Export. Local farmers and manufacturers would come to town to sell their goods and load them on rail cars bound for New York City or abroad. These goods consisted of manufacturers, grain, milk, livestock, construction materials (mostly slate and brick), paper & pulp, timber and beverages.

The village faces an Environmental Crisis due to high levels of potentially cancer causing PFOA being detected in the Municipal Water Supply. The high levels of PFOA were not relayed to residents for over a year after first detected by the New York State Department of Health. It was announced on March 30, 2016 that “repeated testing of the village of Hoosick Falls' municipal water system shows non detection of Perfluorooctanoic acid (PFOA) and is now safe for all uses including drinking and cooking, but doubt still exists due to continued distrust of political agendas .” The federal Environmental Protection Agency is considering a proposal to add the Saint-Gobain Performance Plastics site in the Village to its Superfund National Priorities List (NPL).

According to the United States Census Bureau, the village has a total area of 1.7 square miles (4.4 km2), all land.

The village is divided by the Hoosic River.

Hoosick Falls is bisected by NY Route 22. Public transportation to and from the village is provided between Albany and Bennington, Vermont by Yankee Trails World Travel's weekday-running Albany-Bennington Shuttle bus. 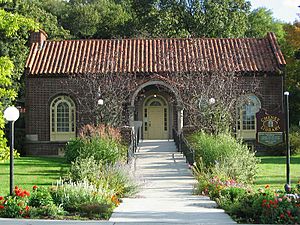 The Cheney Library, located on Classic Street in Hoosick Falls

All content from Kiddle encyclopedia articles (including the article images and facts) can be freely used under Attribution-ShareAlike license, unless stated otherwise. Cite this article:
Hoosick Falls, New York Facts for Kids. Kiddle Encyclopedia.