Wannanup (also known as Port Bouvard, Avalon and Florida ) is a residential suburb in Western Australia, located 12 kilometres (7 mi) southwest of Mandurah and 87 kilometres (54 mi) south-southwest of the state capital, Perth. It is surrounded on three sides by water — the Indian Ocean to the west, the Harvey Estuary to the east and the Dawesville Channel to the south — and is home to the Port Bouvard development. It is one of four suburbs which lie on an island created by the building of the Dawesville Channel.

The 21st Century as seen the landscape of Wannanup transformed, with the development of Port Bouvard transforming the community from that of a sleepy fishing settlement to a commuter suburb and holiday destination. The Northport estate to the suburb's west lies close to Avalon and Village beaches and consists of modern townhouses based around a small shopping centre surrounded by a network of canals and modern mansions. Meanwhile, the Eastport estate is home to the Port Bouvard Marina, which is a popular area for activities such as boating and fishing. 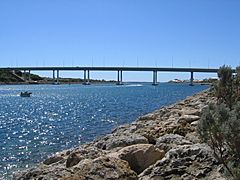 Wannanup is bisected by Old Coast Road in a similar manner to neighbouring suburbs Falcon and Dawesville. Transperth routes 592 and 594 frequently service the suburb. 592 runs six days a week through the Northport portion of Wannanup while 594 goes straight through the suburb via Old Coast Road and Merrivale Street, but runs 7 days a week. Services generally run every twenty minutes during peak hour with 592 and 594 alternating every ten minutes in terms of departing Mandurah Station with some school specials deviating from this normal pattern.

All content from Kiddle encyclopedia articles (including the article images and facts) can be freely used under Attribution-ShareAlike license, unless stated otherwise. Cite this article:
Wannanup Facts for Kids. Kiddle Encyclopedia.