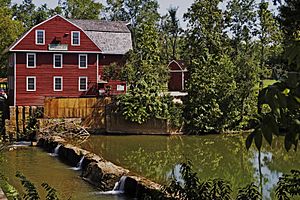 War Eagle, Arkansas is an unincorporated community in Benton County, Arkansas, United States. It is the location of (or is the nearest community to) War Eagle Bridge, which carries CR 98 over War Eagle Creek and is listed on the National Register of Historic Places. It is also home to the 1832 War Eagle Mill which is still in operation as an undershot grist mill.

War Eagle has been noted for its unusual place name.

All content from Kiddle encyclopedia articles (including the article images and facts) can be freely used under Attribution-ShareAlike license, unless stated otherwise. Cite this article:
War Eagle, Arkansas Facts for Kids. Kiddle Encyclopedia.