Warrior Scarlet is an historical adventure novel for children by Rosemary Sutcliff, illustrated by Charles Keeping and first published in 1958. It is her only novel set in Bronze Age Britain, approximately 900 BCE, and takes place in and around the South Downs in England. 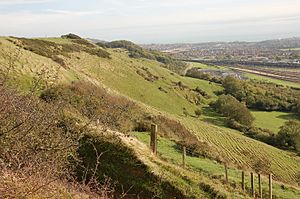 The Downs; the landscape where Drem grows up

The story centres on Drem, a young boy who dreams of becoming a warrior and earning the right to wear a kilt of 'Warrior Scarlet' but fears his crippled right arm will prevent this. To pass the test of manhood, he must kill a wolf on his own; those who fail are expelled from the tribe and sent to the 'Half People' who herd sheep on the South Downs.

Drem lives with his elder brother Drustic, grandfather, mother and a girl named Blai, abandoned years before by a travelling blacksmith. He teaches himself to compensate for his disability and at the age of 12 goes to the 'Boys House' to learn how to be a warrior; while there, the Chieftain's son Vortrix becomes his friend and blood brother. At 15, the boys undertake their 'Wolf Slaying' but when it is Drem's turn, he slips and is nearly killed, surviving only when Vortrix wounds the wolf, which escapes.

As a result, he is sent to the Half People, only meeting his former friends when they provide the Wolf Guard to protect the sheep. One evening towards the end of winter, Drem sets out to rescue an old shepherd named Doli, who went searching for a lost sheep; he finds him but is attacked by three wolves, including the same one he failed to kill during his Wolf Slaying. This time he succeeds, although badly wounded and is saved only by the arrival of the Wolf Guard. When Drem recovers, he learns that since it was the same wolf and wounded him in the same place, his previous failure has been wiped clean; he has succeeded and later undergoes the initiation ceremony whereby boys become warriors.

Drem is shown to have grown emotionally as well; his failure forced him to face his own fear of being an outcast and see others with greater compassion and understanding. The final chapter centres on the Celtic festival of Beltane, which occurs around 1 May and signalled the beginning of the new year; during this festival, couples who wish to be married leap through the flames of a large bonfire. Drem realises he and Blai are both outcasts and belong together; the book ends with them running up the hill to the bonfire.

All content from Kiddle encyclopedia articles (including the article images and facts) can be freely used under Attribution-ShareAlike license, unless stated otherwise. Cite this article:
Warrior Scarlet Facts for Kids. Kiddle Encyclopedia.