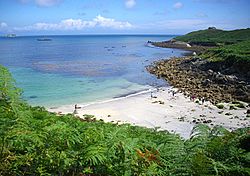 Watermill Cove is on the north–west coast of St Mary's, Isles of Scilly.

It is a historic anchorage, still used today by passing yachts and other small vessels. At Tregear's Porth, there are the remains of an old quay, with the slipway still in use for small craft.

The cove is within an Area of Outstanding Beauty, is a Geological Conservation Review site and was designated a Site of Special Scientific Interest (SSSI) in 1996. The 0.48-hectare (1.2-acre) site is notified for a succession of Quaternary exposures in the cliff and from sea level to the top of the cliff (oldest to youngest) the succession shows:

All content from Kiddle encyclopedia articles (including the article images and facts) can be freely used under Attribution-ShareAlike license, unless stated otherwise. Cite this article:
Watermill Cove Facts for Kids. Kiddle Encyclopedia.