Wednesfield Football Club are a football club based in Wednesfield, West Midlands, England. They were established in 1961. They have reached the 3rd round of the FA Vase twice in their history. They are members of the West Midlands (Regional) League Premier Division.

The club was originally formed in 1961 as Wednesfield Social FC, changing its name in 1989. They gained entry to the West Midlands (Regional) League in 1976 and won the championship of Division One A in their first season, followed by a runners-up position in Division One the very next season, clinching promotion to the Premier Division. In 1995–96 they won the Premier Division title but were not promoted, however the following year they repeated their title success and this time moved up to the Midland Football Alliance, where they remained for six seasons before a last place finish in 2002–03 saw them relegated back to the West Midlands League, where they have struggled. In fact in 2004–05 they finished bottom but were spared relegation.

After a few years of consolidation a new management team came in during 2006/07. The team finished the season in thirteenth place but the following year finished in fourth place and reach the finals of the League Cup and the J.W. Hunt Cup. 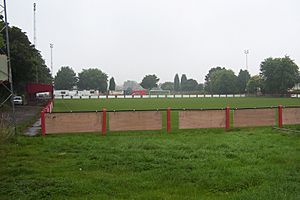 The Cottage Ground in Amos Lane, Wednesfield has been the team's home since 1971. For the first ten years of their existence they played at King George's Park. The Cottage itself was an institute for homeless and orphaned children until its closure in the early 1970s, and the land where the football club is now situated had been its sports field.

The highest attendance recorded at the Cottage Ground is 480. In 2003 a crowd of just 10 people was recorded for the visit of Biddulph Victoria, the lowest attendance ever recorded in the Midland Alliance. The club currently ground-share with Willenhall Town.

The club also has two open age ladies football teams based at the club although not affiliated with each other. Wednesfield FC Ladies play in the Birmingham County Womens League Premier Division. They have progressed through all the age groups since formation by manager Paul Smith in 2005. In the 2014-15 season they were Division 2 Champions with a 100% record which earned them a double promotion. Wednesfield Town Ladies play in the Birmingham Regional Womens League Premier Division.

All content from Kiddle encyclopedia articles (including the article images and facts) can be freely used under Attribution-ShareAlike license, unless stated otherwise. Cite this article:
Wednesfield F.C. Facts for Kids. Kiddle Encyclopedia.