The Wee Jasper Nature Reserve is a protected nature reserve that is located in the Southern Tablelands region of New South Wales, in eastern Australia. The 630-hectare (1,600-acre) reserve is situated to the west of the Goodradigbee River arm of Burrinjuck Dam near the rural locality of Wee Jasper. 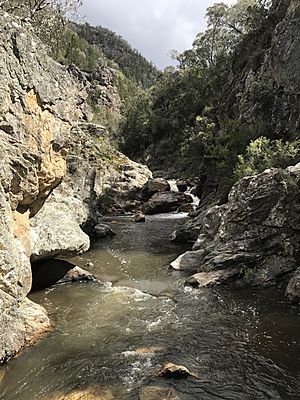 60 species of animal have been identified in the reserve.

All content from Kiddle encyclopedia articles (including the article images and facts) can be freely used under Attribution-ShareAlike license, unless stated otherwise. Cite this article:
Wee Jasper Nature Reserve Facts for Kids. Kiddle Encyclopedia.