The Wells Fargo Pavilion is a theatre venue, located in Sacramento, California, and owned by California Musical Theatre and the Sacramento Theatre Company.

The signature feature of the H Street Theatre Project which renovated almost the entire block. The stage is a Theatre in the round and has a 32-foot (9.8 m) diameter. The theatre seats up to 2,200 guests with a total of 53,000 square feet (4,900 m2). The pavilion is home for the Sacramento Music circus, a Summer stock theatre. 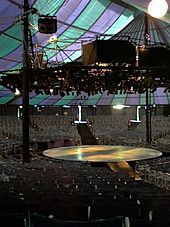 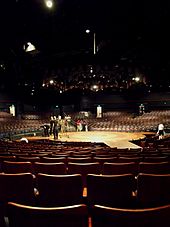 The site is built on top of the original concrete foundations from the Music Circus tent. Music Circus was a theatre form begun in Lambertville, N.J., by St. John Terrell in 1949. Established as summer stock, the new theatre venues primarily housed light operas and operettas, produced in the round, under a circus-style big top. In 2002, Terrell's open air music circus model ceased to exist as Sacramento Music Circus. It lowered its canvas tent for the last time, returning the following year in this state of the art complex which offers new Technology improvements such as an expanded lighting grid and a variable-level turntable stage. The original architect is R.F. McCann & Co.

Construction for the new pavilion began in the early 2000s and opened to the public in the Summer of 2003. The structure consists of hard sided walls with a soft covering, copying its silhouette from the old circus tent. The tent is a permanent structure covered with Teflon-coated fiberglass fabric without tent poles that had previously obstructed the views of the stage.

All content from Kiddle encyclopedia articles (including the article images and facts) can be freely used under Attribution-ShareAlike license, unless stated otherwise. Cite this article:
Wells Fargo Pavilion Facts for Kids. Kiddle Encyclopedia.