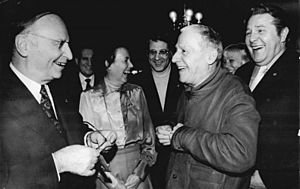 Werner Rackwitz (3 December 1929 – 14 March 2014) was a German opera director and politician. From 1963 to 1969, he was the Head of Music at the Ministry of Culture of the German Democratic Republic (East Germany) and from 1969 to 1981 he was the Deputy Minister of Culture. He was born in Wrocław, Weimar Republic (now Poland).

All content from Kiddle encyclopedia articles (including the article images and facts) can be freely used under Attribution-ShareAlike license, unless stated otherwise. Cite this article:
Werner Rackwitz Facts for Kids. Kiddle Encyclopedia.