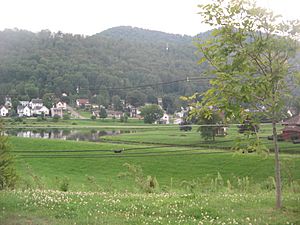 West Branch Pine Creek is a tributary of Pine Creek in Potter County, in Pennsylvania, in the United States. It is approximately 17.0 miles (27.4 km) long and flows through Summit Township, West Branch Township, and Galeton.

West Branch Pine Creek begins in Summit Township. It flows east-southeast for approximately half a mile before turning southeast in a valley. After several miles, the creek briefly turns east for a short distance before entering West Branch Township. It then turns southeast again before turning roughly east-northeast and receiving the tributary Hopper House Hollow. Slightly further downstream, the creek receives the tributary Sunken Branch. It picks up the tributaries Indian Run and Lyman Run and continues in approximately the same direction as its valley widens. The creek receives several more tributaries before entering the community of Galeton. After a few tenths of a mile, it reaches its confluence with Pine Creek.

It is possible to canoe on 6.9 miles (11.1 km) of West Branch Pine Creek during snowmelt and within four days of heavy rain. The difficulty rating of the creek is 2 and it is considered to be suitable for novice canoers. Edward Gertler describes the scenery along it as "good" in his book Keystone Canoeing.

All content from Kiddle encyclopedia articles (including the article images and facts) can be freely used under Attribution-ShareAlike license, unless stated otherwise. Cite this article:
West Branch Pine Creek Facts for Kids. Kiddle Encyclopedia.