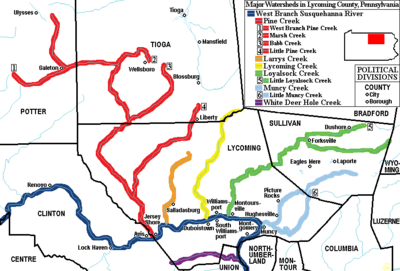 Pine Creek is a tributary of the West Branch Susquehanna River in Potter, Tioga, Lycoming, and Clinton counties in Pennsylvania in the United States. The creek is 87.2 miles (140.3 km) long. Within Tioga County, 23.25 miles (37.42 km) of Pine Creek are designated as a Pennsylvania Scenic River.

Pine Creek is named for the many pine trees that lined (and now again line) much of its banks. The Iroquois called Pine Creek Tiadaghton, which according to Owlett, either meant "The River of Pines" or "The Lost or Bewildered River". Pine Creek is the largest "creek" in the United States.

Pine Creek's source is in Potter County, 5 miles (8 km) southeast of Ulysses. It flows southeast 16 miles (26 km) to Galeton, where it receives its first major tributary, the West Branch Pine Creek. It then flows east 12 miles (19 km) to Tioga County and the village of Ansonia. Here it receives its second major tributary, Marsh Creek, and turns south again for 16 miles (26 km). This stretch is the start of the Pine Creek Gorge, which is about 1,000 feet (300 m) deep in places. 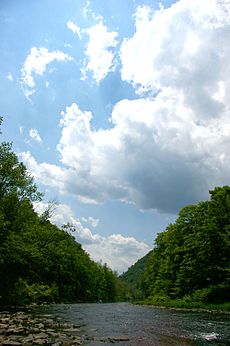 Its confluence with the West Branch Susquehanna River is at this border, between the boroughs of Avis (in Clinton County, to the west) and Jersey Shore (in Lycoming County, to the east).

Pine Creek and Pine Creek Gorge (also known as the Grand Canyon of Pennsylvania) are a popular outdoor recreation destination. The West Rim Trail is a 30-mile-long (48 km) hiking trail along the west rim of the Pine Creek Gorge.

The Fair Play Men were illegal settlers (squatters) who established their own system of self-rule from 1773 to 1785 in the West Branch Susquehanna River valley of Pennsylvania in what is now the United States. Because they settled in territory claimed by Native Americans, they had no recourse to the Pennsylvania colonial government. Accordingly, they established what was known as the Fair Play System, with three elected commissioners who ruled on land claims and other issues for the group. In a remarkable coincidence, the Fair Play Men made their own declaration of independence from Britain on July 4, 1776, beneath the "Tiadaghton Elm" on the west bank of Pine Creek, very near the mouth.

All content from Kiddle encyclopedia articles (including the article images and facts) can be freely used under Attribution-ShareAlike license, unless stated otherwise. Cite this article:
Pine Creek (Pennsylvania) Facts for Kids. Kiddle Encyclopedia.