Tioga County is a county located in the U.S. state of Pennsylvania. As of the 2010 census, the population was 41,981. Its county seat is Wellsboro. The county was created on March 26, 1804, from part of Lycoming County and later organized in 1812. It is named for the Tioga River.

The county was originally settled by immigrants of "Yankee" stock (immigrants from New England and the western part of New York descended from the English Puritans whose ancestors settled New England in the colonial era). With the opening of a rough wagon road to the source of the Tioga River, New England settlers poured over the Allegheny Mountains. Tioga County resembled upstate New York more than it did Pennsylvania with its population primarily consisting of settlers from New England. Roads were laid out, post routes established, public buildings erected and people were invited to move there. The original settlers were entirely of New England origins or were Yankees from upstate New York whose families had moved to that place from New England only one generation earlier, in the aftermath of the Revolutionary War. This resulted in Tioga County being culturally contiguous with early New England culture.

In March 2012, the Tioga County Commissioners approved a marcellus shale impact fee ordinance. The Commissioners anticipated $5.5 million to $6 million in annual impact fee revenue. In 2012, under Governor Corbett, the Pennsylvania General Assembly passed a bill that authorizes an impact fee be collected on marcellus shale wells. Regulations and processes for distribution of the money are governed by the Pennsylvania Utility Commission (PUC). Annual reports on the number of wells and revenues taken in are made public on the PUC website.

In 2016, the Pennsylvania Utility Commission lowered the Impact fee on shale gas wells.

The use of the impact shale fee funds is limited by state law to:

In 2014 Tioga County received an impact fee disbursement of $3,593,564.21 which was among the top seven Pennsylvania counties receiving impact funds. In 2014, there were 839 marcellus shale wells in Tioga County. Statewide the top county recipient was Washington County which received $6,512,570.65 in 2014.

There are three Pennsylvania state parks in Tioga County. 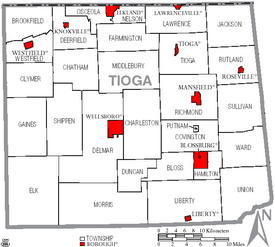 Under Pennsylvania law, there are four types of incorporated municipalities: cities, boroughs, townships, and, in at most two cases, towns. The following boroughs and townships are located in Tioga County:

The population ranking of the following table is based on the 2010 census of Tioga County.

All content from Kiddle encyclopedia articles (including the article images and facts) can be freely used under Attribution-ShareAlike license, unless stated otherwise. Cite this article:
Tioga County, Pennsylvania Facts for Kids. Kiddle Encyclopedia.