Wellsboro is a borough in Tioga County, Pennsylvania, United States, 52 miles (84 km) northwest of Williamsport. Early in the 20th century, Wellsboro was the shipping point and trade center for a large area. It had fruit evaporators, flour and woolen mills, a milk-condensing plant, marble works, saw mills, foundry and machine shops, and manufactories of cut glass, chemicals, rugs, bolts, cigars, carriages, and furniture. In 1900, 2,945 people lived here; in 1910, 3,183 lived here. The population was 3,328 at the 2000 census. It is the county seat of Tioga County, and also home to the Grand Canyon of Pennsylvania.

Wellsboro was incorporated in 1830 and was named in honor of Mary Wells, wife of one of the original settlers, Benjamin Wistar Morris. The town was the home of George W. Sears (1821 – 1890), a sportswriter for Forest and Stream magazine in the 1880s and an early environmentalist. His stories, appearing under the pen name, "Nessmuk" popularized self-guided canoe camping tours of the Adirondack lakes in open, lightweight solo canoes and what is today called ultralight camping. Wellsboro was also the site of one of the first factories where light bulbs were mass-produced, using machines whose design remains essentially unchanged from the early 20th century when the Corning company established the plant in the town.

The very-low-budget film maker John Polonia. was emloyed by BiLo Market for 22 years, as his movies did not pay the bills. He died in Wellsboro in 2008.

Additional historical information can be found at http://www.joycetice.com/towns/wellsboro.htm. 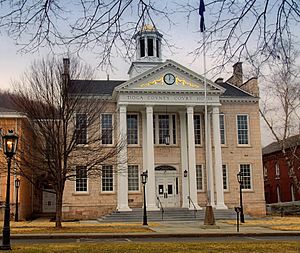 There were 1,469 households out of which 25.0% had children under the age of 18 living with them, 47.0% were married couples living together, 9.7% had a female householder with no husband present, and 41.0% were non-families. 36.1% of all households were made up of individuals and 18.2% had someone living alone who was 65 years of age or older. The average household size was 2.17 and the average family size was 2.83.

All content from Kiddle encyclopedia articles (including the article images and facts) can be freely used under Attribution-ShareAlike license, unless stated otherwise. Cite this article:
Wellsboro, Pennsylvania Facts for Kids. Kiddle Encyclopedia.