Lawrenceville is a borough in Tioga County, Pennsylvania, in the United States. The population was 627 at the 2000 census.

The James Ford House and Judge John Ryon House are listed on the National Register of Historic Places.

The community is at the New York state line, and part of its development continues into the town of Lindley in Steuben County, New York.

There were 262 households out of which 30.9% had children under the age of 18 living with them, 46.9% were married couples living together, 13.4% had a female householder with no husband present, and 33.2% were non-families. Of all households 27.9% were made up of individuals and 13.7% had someone living alone who was 65 years of age or older. The average household size was 2.34 and the average family size was 2.81. 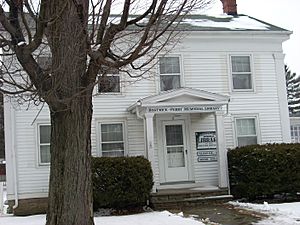 While Lawrenceville is very small, there are a couple of family owned restaurants and a few gas stations. There is a Dollar General and a small grocery store called Preston's.

Some towns that are near Lawrenceville are Tioga, Pa, Mansfield, Pa. and Wellsboro, Pa. Tioga is about 5–7 minutes away and there is a skating rink and some family-owned restaurants. Mansfield is about 20 minutes away, and that is a slightly larger town. There are several fast food and chain restaurants there as well. Mansfield University is located in Mansfield, along with a high school and a bowling alley. Wellsboro is a 30-minute drive away but bigger than Mansfield and much bigger than Lawrenceville. It contains Packer Park, which is a park with a play area for kids and tennis courts, pools, basketball courts, et cetera.

All content from Kiddle encyclopedia articles (including the article images and facts) can be freely used under Attribution-ShareAlike license, unless stated otherwise. Cite this article:
Lawrenceville, Pennsylvania Facts for Kids. Kiddle Encyclopedia.