Galeton is a borough in Potter County, Pennsylvania, United States, 50 miles (80 km) southeast of Bradford. Light industries such as knitting mills and a tannery have existed in Galeton. The population declined to 1,149 people in 2010.

There were 513 households, out of which 31.0% had children under the age of 18 living with them, 49.9% were married couples living together, 11.9% had a female householder with no husband present, and 32.2% were non-families. 27.5% of all households were made up of individuals, and 15.6% had someone living alone who was 65 years of age or older. The average household size was 2.48 and the average family size was 2.97. 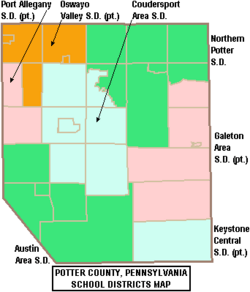 Seneca Highlands Intermediate Unit #9 provides a wide variety of services to children living in its region which includes Galeton. Early screening, special educations services, speech and hearing therapy and many other services like driver education are available. Services for children during the preschool years are provided without cost to their families when the child is determined to meet eligibility requirements.

All content from Kiddle encyclopedia articles (including the article images and facts) can be freely used under Attribution-ShareAlike license, unless stated otherwise. Cite this article:
Galeton, Pennsylvania Facts for Kids. Kiddle Encyclopedia.