Cummings Township was formed by the Pennsylvania General Assembly in 1832 from parts of Mifflin and Brown Townships. It was named for John Cummings who was an associate judge in the local court system at the time. Early industry in the county included quarries of flag and building stone and lumber.

The Little Pine and Pine Valleys in Cummings Township were used by the Iroquois and Algonkian tribes as a hunting ground. Historians believe that there may have been a Shawnee village and burial ground just to the north of Little Pine State Park on Little Pine Creek.

By the mid 19th century the demand for lumber reached Upper Pine Bottom area, where White pine and hemlock covered the surrounding mountainsides. Lumbermen came and harvested the trees and sent them down Pine Creek to the West Branch Susquehanna River to the Susquehanna Boom and sawmills at Williamsport. James and John English were the first to build a sawmill in the area in the Little Pine Area. They built two sawmills in 1809 on Little Pine Creek. In 1816, the village of English Mills sprang up around the two sawmills. The lumber era at Little Pine lasted until 1909, when the last log raft was floated down Little Pine Creek. Remnants of the lumber era can be seen today in and around the park.

Waterville is the most significant population center in Cummings Township. Michael and Henry Wolf arrived in the area from Berks County in 1817. They helped to establish Waterville by building a sawmill and clearing some land for farming. A post office was established in Waterville in 1849. Other early business establishments were two stores and a hotel, which stands today.

Tiadaghton State Forest lands were acquired by the state by the early 1900s. The site which became the park was "Upper Pine Bottom Class B Public Campground" by 1924 (Class B Public Campgrounds were on secondary highways and had a lean-to shelter for camping). During the Great Depression, the Civilian Conservation Corps built a pavilion at the site in 1936, but it is no longer extant. The park was not officially transferred from the Bureau of Forests to State Parks until 1962.

Cummings Township is bordered by Clinton County to the west, McHenry, Pine and Cogan House Townships to the north, Mifflin Township to the east, and Watson Township to the south. As the crow flies, Lycoming County is about 130 miles (209 km) northwest of Philadelphia and 165 miles (266 km) east-northeast of Pittsburgh.

Waterville is an unincorporated community in the dense woods of the Glaciated Allegheny Plateau in south-central Cummings Township. It lies in the deep valley of Pine Creek, Pine Creek Gorge, at the mouth of Little Pine Creek. Pennsylvania Route 44 travels through Waterville, heading south-southeastward along Pine Creek to the borough of Jersey Shore. The city of Williamsport, the county seat of Lycoming County, is to the east. 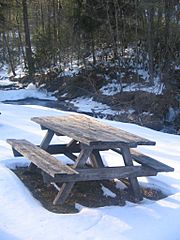 There were 153 households, out of which 25.5% had children under the age of 18 living with them, 58.2% were married couples living together, 5.9% had a female householder with no husband present, and 30.1% were non-families. 22.9% of all households were made up of individuals, and 11.8% had someone living alone who was 65 years of age or older. The average household size was 2.31 and the average family size was 2.69.

All content from Kiddle encyclopedia articles (including the article images and facts) can be freely used under Attribution-ShareAlike license, unless stated otherwise. Cite this article:
Cummings Township, Lycoming County, Pennsylvania Facts for Kids. Kiddle Encyclopedia.