Tiadaghton State Forest ( TY-ə-DAH-tən) is a Pennsylvania State Forest (Forest District #12) in the Pennsylvania Department of Conservation and Natural Resources, Bureau of Forestry. The forest is primarily in western and southern Lycoming County, with small portions in Clinton, Potter, Tioga, and Union Counties. The district's topography consists of narrow, flat to sloping plateaus cut by deep, steep-sloped valleys carved by fast moving mountain streams, including Pine Creek, Slate Run, and their tributaries. The Tiadaghton district extends south across the lowland along the west branch of the Susquehanna River to the narrow crests of Bald Eagle Mountain and North and South White Deer Ridge. The majority of forest cover is dominated by mixed oak forests, with some areas of northern hardwoods. The Tiadaghton State Forest is one of eight forest districts in the Pennsylvania Wilds region.

The forest district office, the Tiadaghton Resource Management Center, is located just north of the town of Waterville, in Lycoming County, Pennsylvania in the United States. Tiadaghton is the Iroquois name for Pine Creek, but its meaning is unknown.

As the timber was exhausted and the land burned, many companies simply abandoned their holdings. Conservationists like Dr. Joseph Rothrock became concerned that the forests would not regrow if they were not managed properly. They called for the state to purchase land from the lumber companies and for a change in the philosophy of forest management. In 1895 Rothrock was appointed the first commissioner of the Pennsylvania Department of Forests and Waters, the forerunner of today's Department of Conservation and Natural Resources. In 1897 the Pennsylvania General Assembly passed legislation which authorized the purchase of "unseated lands for forest reservations" and the first Pennsylvania state forest lands were acquired the following year.

Prior to the July 1, 2005 realignment of Pennsylvania State Forest Districts, Tiadaghton State Forest included all state forest lands in Lycoming County and encompassed 215,500 acres (87,210 ha). After realignment, the state forest tracts in eastern Lycoming County became part of the new Loyalsock State Forest. The District #12 office will also move from South Williamsport to Waterville, at the confluence of Little Pine Creek and Pine Creek, where the largest part of the forest is now located. The southern tracts are along Bald Eagle Mountain, North White Deer Ridge, South White Deer Ridge, and the White Deer Hole Creek watershed. 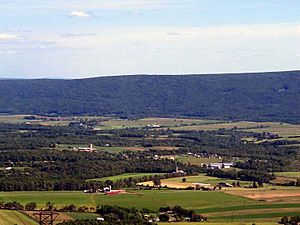 All content from Kiddle encyclopedia articles (including the article images and facts) can be freely used under Attribution-ShareAlike license, unless stated otherwise. Cite this article:
Tiadaghton State Forest Facts for Kids. Kiddle Encyclopedia.