West Town is residential area of the city of Peterborough, Cambridgeshire in the United Kingdom. For electoral purposes it forms part of Peterborough West ward. 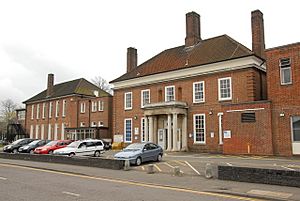 The Memorial Hospital, built by public subscription and donation in 1928, was transferred to the National Health Service in 1948, coming under No. 12 Group (Peterborough and Stamford) Hospital Management Committee of the East Anglian Regional Hospitals Board. The neo-Georgian hospital (latterly the Memorial Wing) was enlarged by the massive addition of Peterborough District Hospital, built in continuous phases between 1960 and 1968. The stone porch has a plain frieze and moulded cornice supported on paired doric columns; an inscription above the doors to the entrance lobby reads IN REMEMBRANCE 1914–1918.

In 2010, as part of the £300 million Greater Peterborough health investment plan, the city's two hospitals transferred to a single site on the grounds of the former Edith Cavell Hospital in Westwood. The 22 acre (8.9 ha) site, now known as the Hospital Quarter, is currently proposed for redevelopment.

All content from Kiddle encyclopedia articles (including the article images and facts) can be freely used under Attribution-ShareAlike license, unless stated otherwise. Cite this article:
West Town, Peterborough Facts for Kids. Kiddle Encyclopedia.